The MIV (Magnetic Inspection Vehicle) is a rail-road vehicle that has revolutionized the cleaning of the tracks from metal debris and metal dust. This innovative rail-road vehicle is able to fully automatically remove steel and metal dust from the sleepers and track ballast. Metal debris presents a problem that becomes larger with each grinding of the rail because it causes malfunctions of the railway signalling system. Therefore requirements regarding the presence of metal debris are becoming more stringent.

The patented vehicle was developed by the principal, in close cooperation with BSE Ymond. The complete upper structure was built on a VOLVO FM 420pk EEV 6×2 chassis, equipped with a rail under carriage that was mounted by SRS Sjolanders. The vehicle houses a number of magnets that can be lowered down until just over the ballast next to the track beams. A number of conveyor belts transports the metal debris that is picked up by the magnets and transports it to collecting bins. What was before a labor-intensive task can now be carried out much faster and more efficient. This method of cleaning the tracks is also much safer as no personnel is required on the track (only operators in the cabin on the machine).

BSE Ymond has designed and built the configuration of the magnets with the conveyor belts. The vehicle is also equipped with a water management system and an arial lift, both completely designed and delivered by BSE Ymond BV. Both units are based on on a standard dimension Twist lock frame, making them fully interchangeable on this multifunctional vehicle. With the vehicle a detachable snow brush was delivered for sweeping snow and dirt from railroad crossings. On the vehicle many (infrared) cameras were mounted to be able to capture the state of the track on film. Afterwards the footage can be analyzed to schedule (preventative) maintenance on sections of track in time. 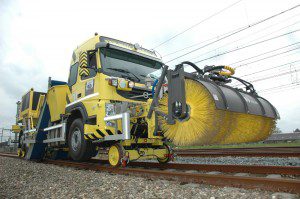